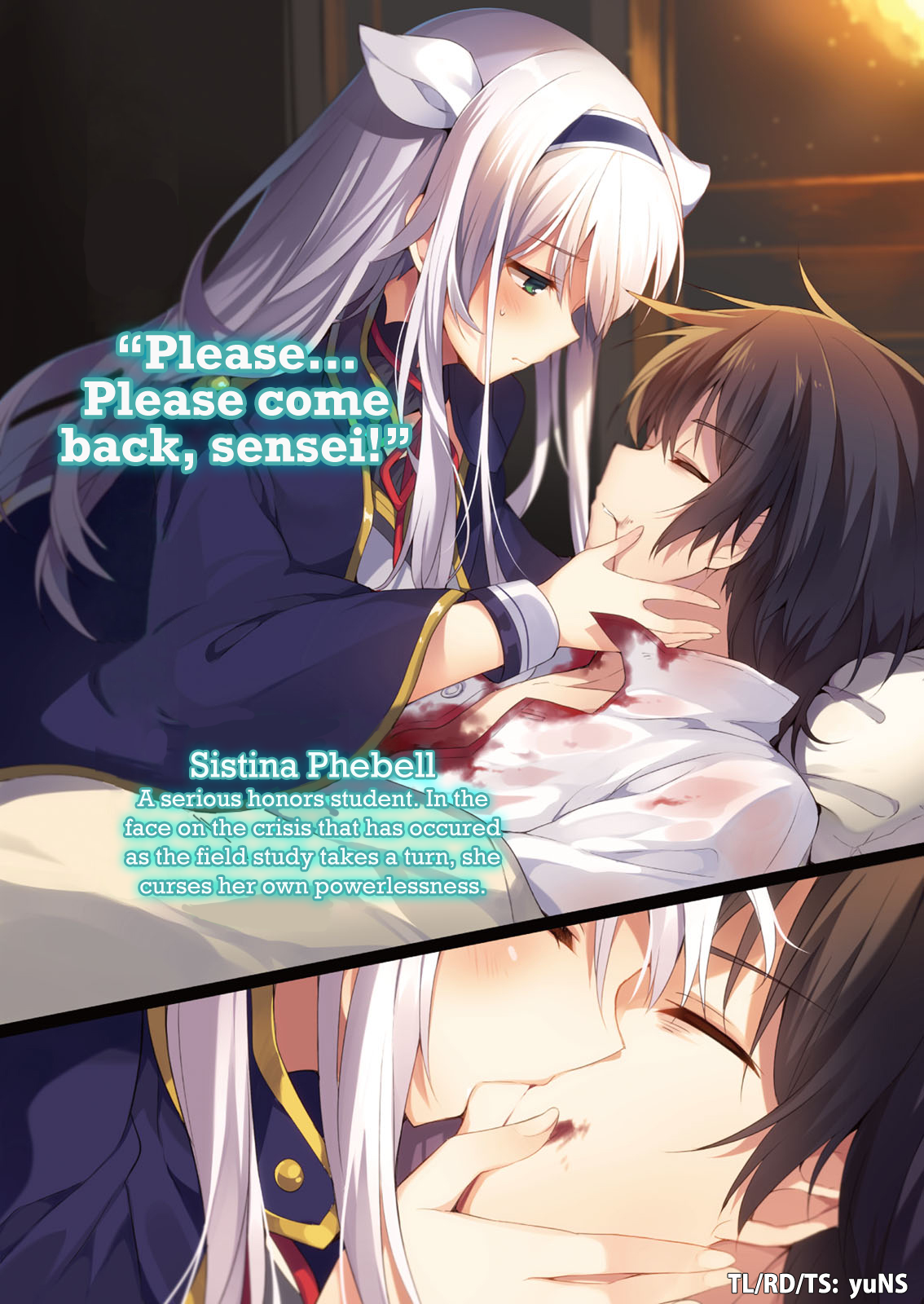 Interlude II: The Thoughts Sinking Amidst the Waves

The dull noise of flesh being pierced. The impact of a body being penetrated.

The impact blew away the thoughts in his mind, leaving it a clean, white slate.

Glen looked down to towards his chest as his lips quivered.

––A red-dyed blade protruded from his chest like a cruel joke.

From its center gushed a tide of fatal crimson that quickly invaded the white expanse of his shirt.

It was an unbelievable, nightmarish sight. He didn’t want to believe his eyes.

His mouth filled with the taste of iron.

Glen turned his head in disbelief towards Riel, who had been the only one behind him.

Standing there holding the blade that pierced through his body was Riel, her eyes darker than the depths of a sea on a moonless night.

Given what she had done, her intentions were clear as day.

She wants to return once again to that abhorrent group – to the Wisdom of the Heavens Research Society.

That danger was always present. Riel was someone who held deep ties with that organization. Although I knew that all kinds of traps had been planted within Riel, It wasn’t as though I understood how they worked.

I wanted to believe in her.

At first, bringing her in had been nothing more than an excuse to fulfill my promise to ‘her’… but having overcome all sorts of crises and battles together, protecting each other’s lives through it all… Riel was now completely on our side… or so I thought.

Even if that organization had placed some traps within her… I thought that, surely, Riel would choose to remain on our side in the end…

Wishing that, I became attached to her, turning a blind eye to how dangerous she was. If I had a little sister… then maybe this is what she would be like; so I had thought.

…Perhaps even such thoughts were a trap in and of itself.

Should I have listened to Albert…? That she was someone who had to be ‘disposed of’?

Was that the right choice?

In contrast to his mind that already accepted this reality, Glen’s heart still held on to a sliver of hope, expressing it through words as he spat out blood.

But— Translated by yuNS

“…Thank you for everything until now.” Riel said, with bloodstained, empty eyes.

It was a decisive statement, a cool-headed parting.

Glen could only grind his teeth in frustration.

However— From www. crimsonmagic. me

It was then that Glen, who had fallen into a grave situation beyond recovery and had mostly given up, restarted his thoughts.

Standing there was a blue-haired boy.

It was the boy who had been conversing with Riel before he had arrived.

He had the same blue hair as Riel, dressed in robes with a stand-up collar.

Now, he simply observed the situation with a pained expression.

What are Riel’s intentions?

He was out of time.

The greatsword that pierced through Glen was swung with ease.

The world swirled before his eyes.

With herculean strength, Riel swung the sword like a whirlwind, together with Glen who was skewered upon it—

Following the momentum, Glen’s body was flung from the sword. His body flew through the air in a parabola.

For one, maybe two seconds, Glen’s body was wrapped in a sense of weightlessness.

After what, to Glen, seemed like an endless bound of time, his body struck the surface of the ocean, where a gush of water burst from the impact.

As he sunk into the water, his body was whipped by the raging tides.

Blood gushed without end from the wound in his chest.

His body seemed be drained of energy with each passing moment—

I can still make it. I’ve lost a lot of energy, but I can still move my mouth. I know the techniques for chanting underwater too.

But— TL from www. crimsonmagic . me

Glen’s original magic had already been invoked. It was only now, did he remember about his magic that sealed the activation of all magic within an area with him at the center.

The original magic [The Fool’s World].

Its name seemed to truly mock Glen at this moment.

He no longer had the strength to drag himself to shore.

Even if he were to make it to shore, without magic and bearing such a wound, he had no method of facing Riel.

…He sunk deeper into the ocean.

His body slowly drifted towards the darkness of the ocean’s depths.

He was already far the surface. No matter how he stretch his hand, it would no longer reach.

That was the last thought that rested on his mind.

Before it finally came to a screeching halt.