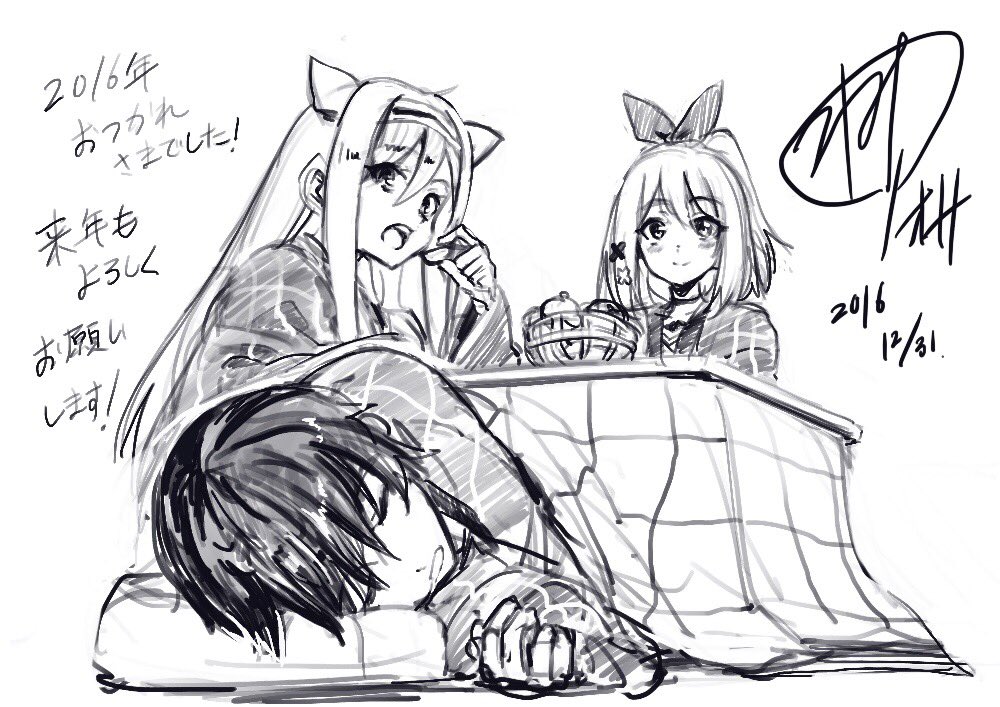 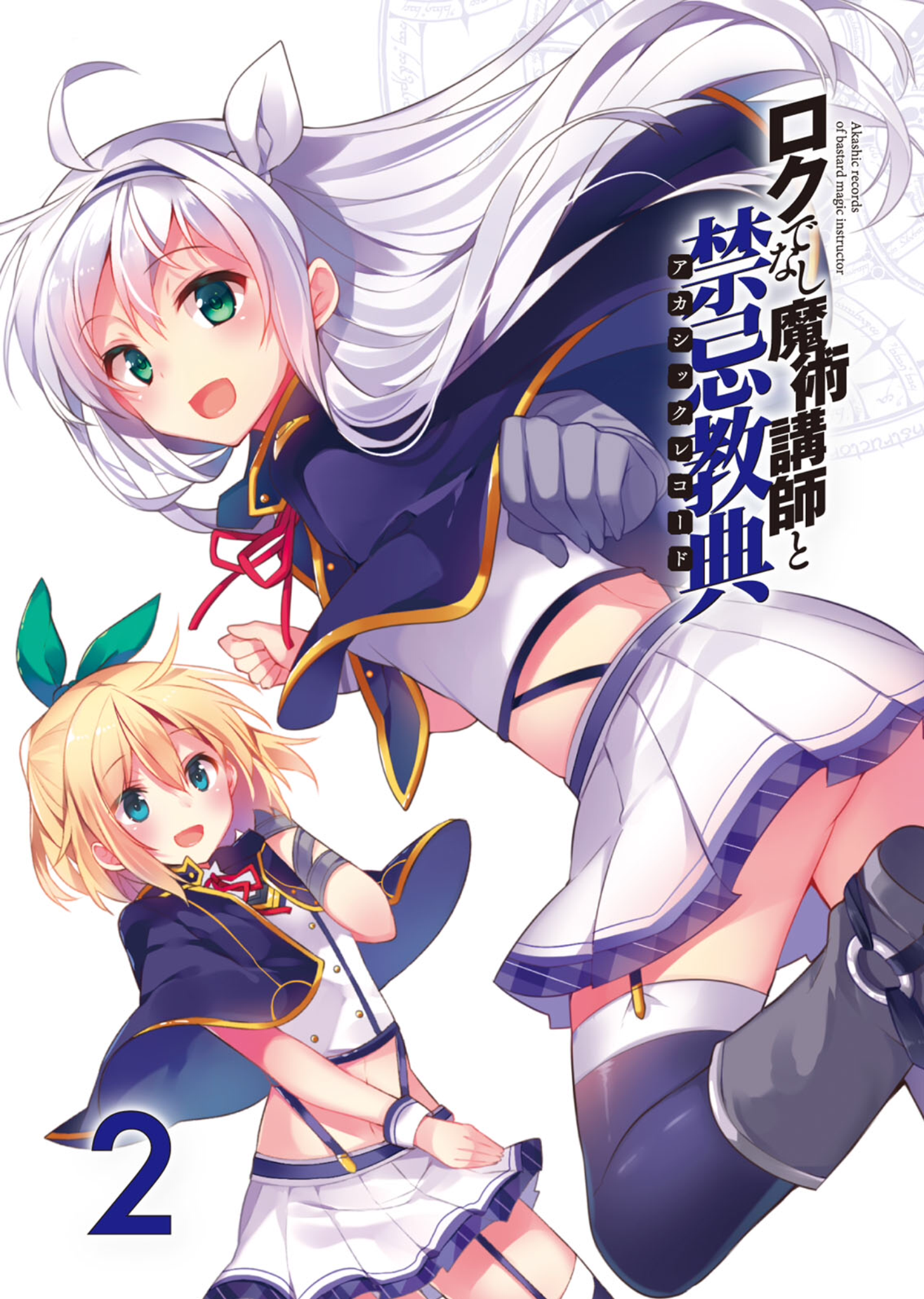 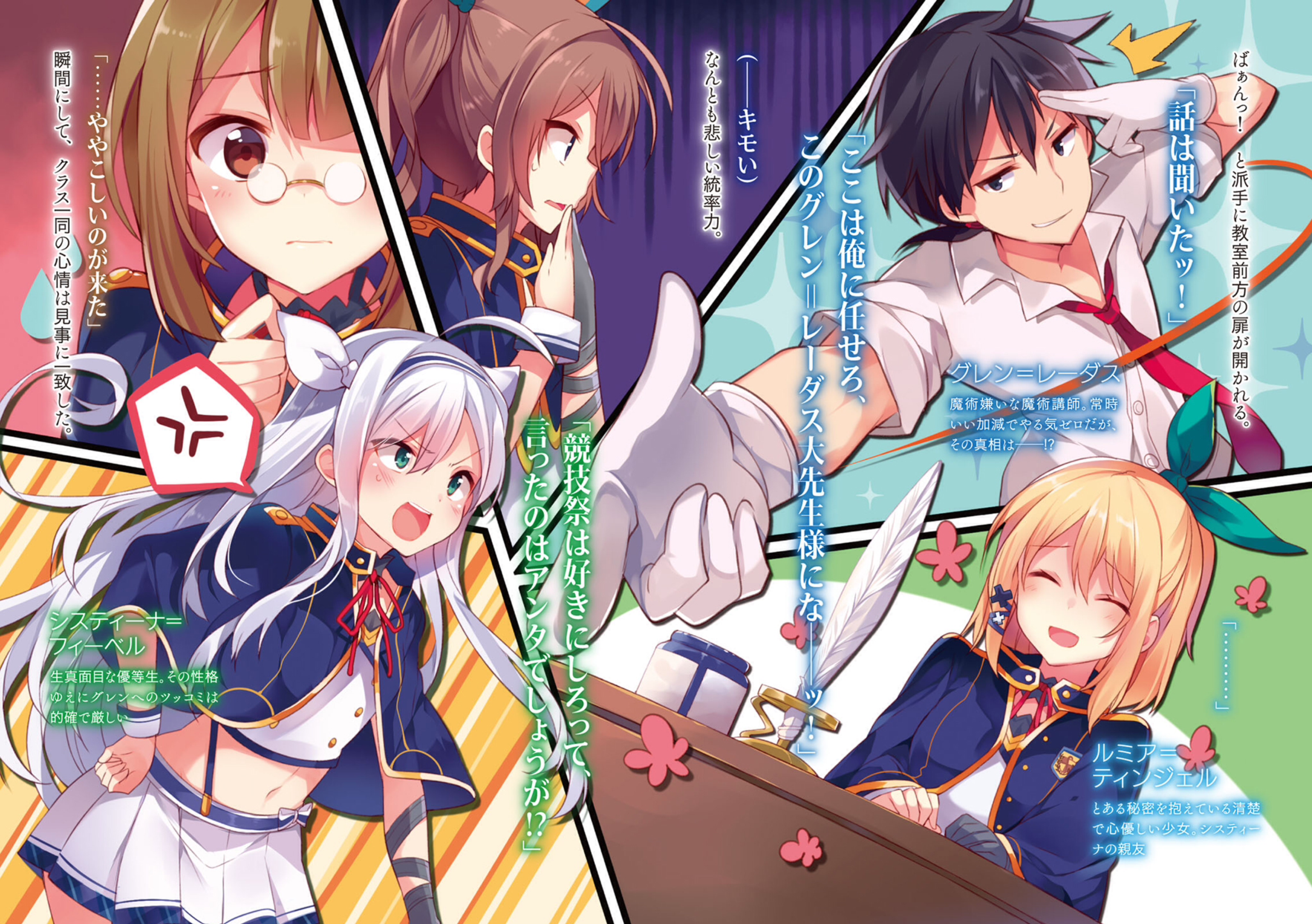 ‘Bang!’, the door to the classroom was slammed open in a showy manner.
Glen: “I’ve heard it all!”
Glen Ryders
A magical instructor that hates magic. He’s usually overbearing and has zero-motivation, but the reality is –!?
Glen: “Leave the rest to me, the great Glen Ryders-sensei-sama—!”
Wendy: (–Gross)
His leadership was pitiable.
Rin: “…The nuisance arrives.”
So much so, that for a moment, the members of the class were united as one.
“………”
Lumia Tinzel
A purely kind-hearted girl who carries a certain secret. Sistina’s close friend.
Sistina: “You told me ‘do whatever you want with the Games Festival’ didn’t you!?”
Sistina Phebell
An overly serious honor student. Due to her personality, her rebuttals for Glen antics are often relentless. 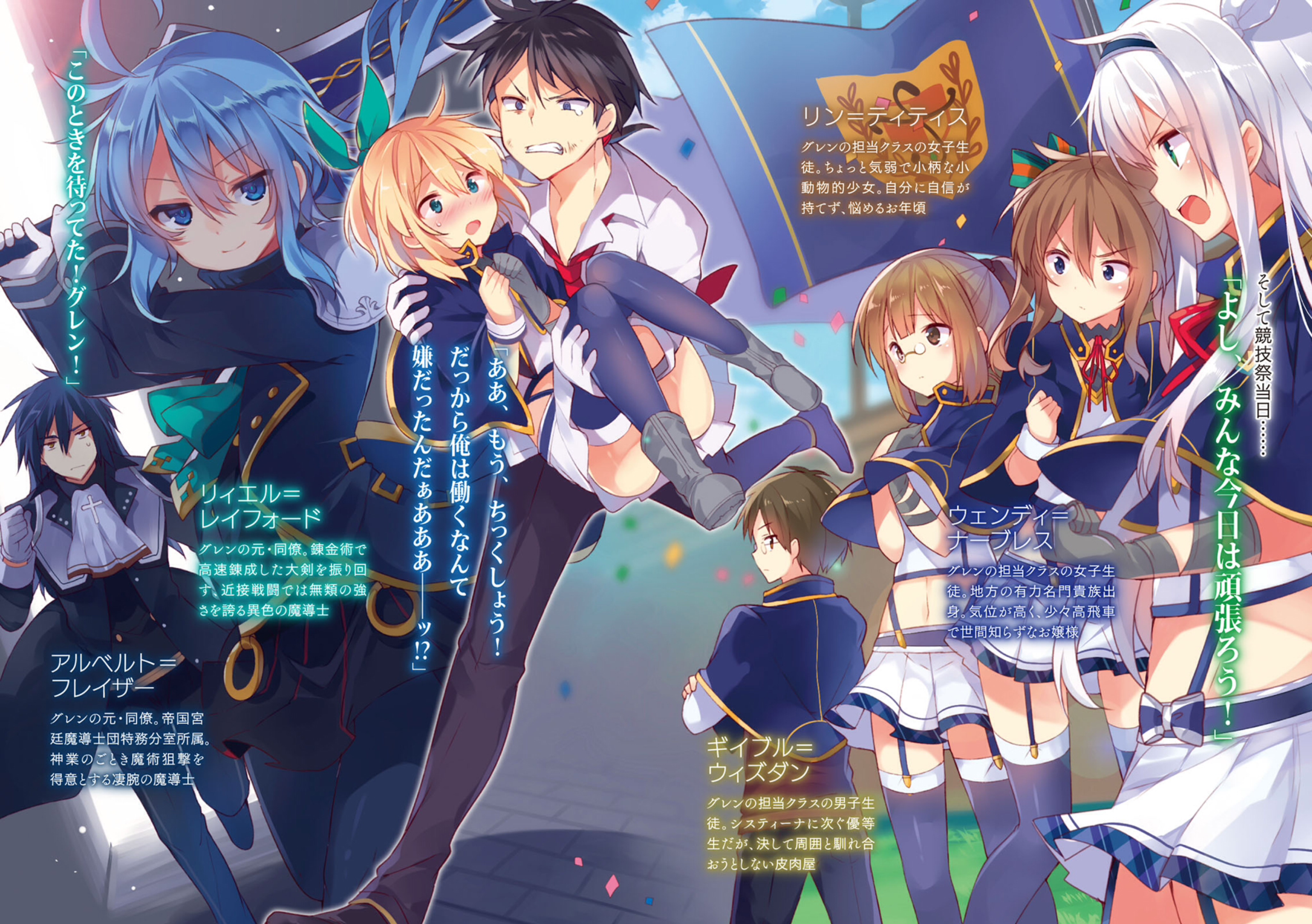 Volume 2-2
And on the day of the Games Festival…
Sistina: “Alright, let’s do our best today everyone!”
Wendy Nabless
A female student of Glen’s class. Having come from a famous and influential noble family, she is slightly to be a bit high-handed in her manners, and is a lady ignorant to the ways of the world.
Rin Teateas.
A female student of Glen’s class. Her timid nature and petite stature gives her the demeanor of a small animal. Without the confidence to back it up, she is currently going through a troubled age.
Gibel Wisdom
A male student of Glen’s class. Although he’s the top-student after Sistina, he’s a snarky person that never gets along well with those around him.
Glen: “Ah, come on, damnit! This is why I really hate workiiiinngggg–!”
Riel: “I’ve been waiting for this moment, Glen!”
Riel Rayford
Glen’s former colleague. Wielding a greatsword synthesized at high-speeds through her alchemy, she is a unique magician who takes pride in her unparalleled strength in close-quarters combat.
Albert Frayzer
Glen’s former colleague. He belongs to the Imperial Court Magician’s special forces, and is an adept magician whose forte is the miraculous feat of magic-sniping.

Volume 2-3
Glen: (Tch… Hurry–Let me make it–!)
Magicians wielded magic using their left haand that was closer to the heart. Zeros, who noticed that action, dashed forward like a gale without a moment’s hesistation.
“I won’t let you–!”
He left behind a afterimage. It was a godspeed step that didn’t seem possible for the human body. 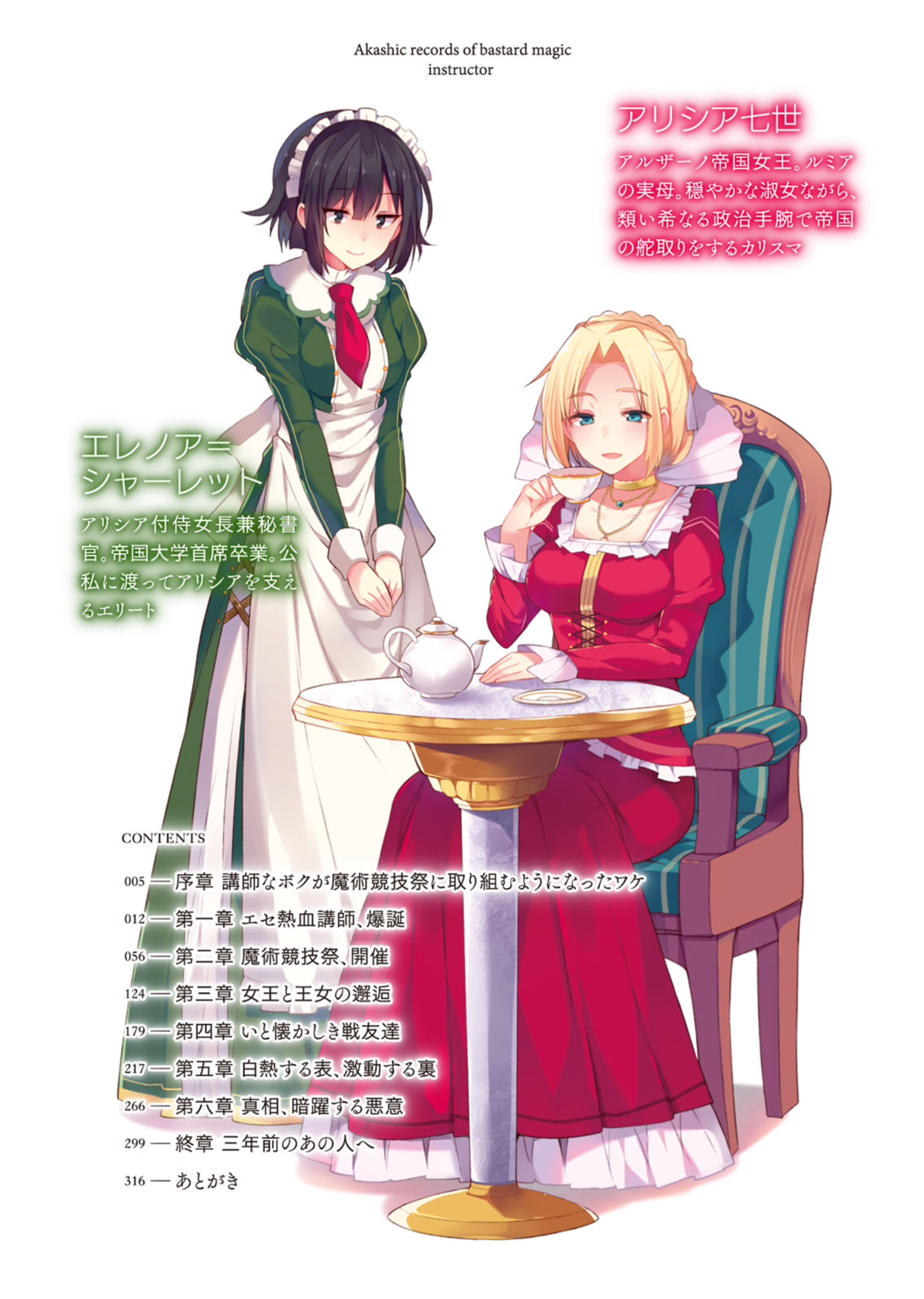 Alicia the Seventh
The empress of the Alzano empire. Lumia’s actual mother. Although she appears to be a gentle lady, she possess a rare talent for poltiical affairs, and as well as the charisma to take the helm of the empire.
Elenora Charlotte
Alicia’s head maid and secretary. An elite who supports Alicia in both personal and political affairs.
Prologue: The Reason I, an Instructor, Seemed to Make an Effort for the Magic Competition
Chapter 1: The Pretend-Enthusastic Instructor, Suddenly Appears
Chapter 2: The Magic Games Festival, Begins
Chapter 3: An Encounter Between Empress and Princess
Chapter 4: Nostalgic Comrades-In-Arms
Chapter 5: Zealous on the Outside, Agitated on the Inside
Chapter 6: Truth, the Veiled Ill-Intent
Final Chapter: To that person, three years ago
Afteword 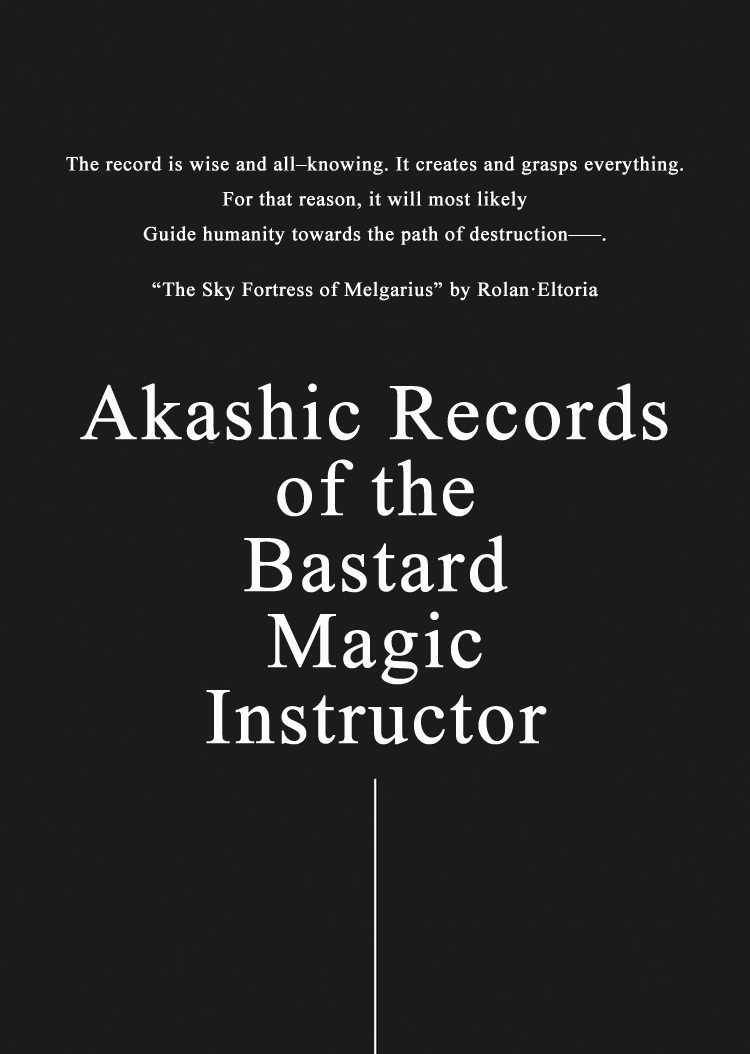 Prologue: The Reason I, an instructor, seemed to make an effort for the magic competition

Afterschool, at the headmaster’s office of Alzano Imperial Magic Academy—

“—T-, That said, I’d like to be paid in advance. If possible, I’d also like to get some allowance as well, puhleaze.”

Suddenly, whirlpool of crimson flames formed, and erupted into a violent explosion.

Serika’s explosion spell mercilessly blew Glen – who had been speaking nonsense – away.

The aftershock of the explosion sent the glass of the windows flying, incinerated the lace-curtains, charred the walls, and turned the carpet into ashes. The gorgeous paintings, the antique bookshelves, the polished decorative armor, the sofa, the shade lamps, and a variety of other furnishing were not spared from the same fate. The interior of the headmaster’s room looked nothing like it was a moment ago.

Glen, whose burnt-black body lay on the floor, cried in rage.

“How annoying! You told me that ‘the survival of a species is at stake’ and said that we needed to have an important conversation, so I came all the way here, but then you give me this nonsense!?”

“What do you mean by nonsense!? If I die from starvation, then I’ll go extinct right!? There’s only one of me left in this world you know!? I’m a endangered species you know!? Treat me with care ok!?”

“Shut up, for all I care you can go extinct! Rather, I’ll personally bring an end to an inferior species like you!”

In the room where Glen and Serika began their pointless scuffle, the owner of the room – headmaster Rick – continued to sit still on his work desk and observe the situation. After a brief while, he interrupted the conversation.

“Well well, please calm down you two. Though, your conversation is staggeringly indirect in some sense… Basically, it’s about Glen-kun’s living expenses is it not…? And he primarily needs money for his food expenses yes?”

“Exactly. As expected of the headmaster, you get what I mean! My-, Serika suddenly told me to pay for my own food expenses you see-?”

“It should be a given! Your time as an unemployed bum aside, you’re now a magic instructor at this academy! You should have a respectable income!”

Serika irritatedly crossed her arms, and glared at Glen.

“To sum it all up, I’m in trouble this month headmaster! At this rate, starting tomorrow,, I’ll be partially forced into the plight of dieting….”

“However, wasn’t payday just one week ago? What exactly did you do with that money?”

In response to that question, Glen showed an expression filled with grief. He walked up to the window, and turned his eyes to the scenery outside.

Outside the window was the academy’s courtyard which was decorated by an impressive flowerbed of a hundred colors. Beyond the metallic fence of the academy was the antiquated town of Fejiti. Finally, floating high in the sky was the grandeur, phantasmal visage of Fejiti’s symbol, the Melgarius’ Sky Castle.

“You asked me how I used the money… Of course, I invested it into my future.”

“Invested in the future?”

“Yes, for the infinite possibilities that lies in what we call ‘tomorrow’, and for the sake of grasping onto a broader wish—”

In response to Glen, who looked into the distance whilst monologuing, Serika interjected with murmurs.

“In other words, you gambled it didn’t you? Ah there’s really no saving you. Just go die already.”

“Can you stop? Despite all the trouble I went through to look cool there, you just had to throw in the bucket didn’t you.”

“To start with, this none of this is my fault you know? It’s the three-of-hearts’ fault! If I picked a card higher than that, then I would’ve—”

In any case, he was the prime example of human trash.

“—All’s said and done, please help me you two.”

“However… the rules are the rules, I can’t give you an advance payment.”

“Guh-, is that so… that’s troubling. Even the loan-sharks said that ‘We won’t loan money to someone of the likes of you who doesn’t even have a stable job’ and other fishy things. The food storage at Serika’s mansion also uses a magic lock, so…”

Glen, who seemed to fall into despair, pressed his palms against his face and took a deep breath.

“Hey Serika-kun. Until the next payday, could you lend Glen-kun some food expenses? He’s lived under the same roof as you for a long time has he not?”

Rick suggested such to Serika. Perhaps he was somewhat sympathetic of Glen.

“I refuse, headmaster. If I spoil this brat then he’ll do the same thing again in the future. In the first place, he deserves everything that he’s brought upon himself. Occasionally, he needs to learn his lesson. Well, until the next payday, work hard to stay alive ok?”

In contrast, Serika’s reaction was cold and blunt.

“Hear that? Headmaster. Geez, this girl, why does she have to… She was always a really selfish person but… my my, how troublesome.”

Glen showed an amazed expression and sighed. Then, the corner of his lips curved upward into a sneer, and then he shrugged his shoulders and began to scornfully laugh.

“W—h—y, why are you speaking as though I have done something wrong!? The one who’s wrong is you isn’t it!?”

Serika grabbed Glen’s head with her hand, and constricted her grip with the extreme force. Grinding sounds could be heard.

“Although I can’t give you an advance payment, there’s still the possibility of a special award, Glen-kun.”

Glen shook out of Serika’s grasp, and quickly rushed towards Rick.

“What do you mean by that exactly?”

“I’m talking about the ‘Magic Games Festival’ that will be hosted by the academy next week.”

“Mhm. It is a competition of magical skills between the students here, and this will mark the third time that we – the Alzano Imperial Magic Academy – will hold this event. The groups will be split by class year, and the representatives of each class will compete in various magic competitions. The instructor in charge of the class that receives the best overall score will receive a special reward, as per custom.”

“The heck, are you for real!? So there was a wonderful event like this all along!?”

“It also happens that the class Glen-kun is in charge of will participate in the Magic Games Festival next week as part of the second year’s group. Since that is the case, how about you try working hard with the special reward as your goal?”

“Yes, I will do my best! Well, despite that, Magic Games Festival… To think there was something like this!? Keh-! If only I was told about this sooner…-!”

“No, you, you’re an alumni of this academy right? How could you not know about this? To begin with, the second years should all be riled up about it. To add onto that, this time around, the empress herself is—”

“Yeah yeah, that doesn’t matter anymore! There are more important things that I must do! Tch—, those guys, hopefully they’re still there but… — Till next time then!”

However, Glen did not even spare a moment to listen to Serika. It seemed that he had something on his mind, but he clenched his fists tightly, and turned on his heels to leave, dashing out of the headmaster’s office.

“…So headmaster? In reality, what are the chances of Glen’s class winning?”

Rick responded to Serika’s question with a smile.

“It’s true that Glen-kun’s class has Sistina-kun, who has the top grades of her year, but… from a holistic standpoint, Harry-kun’s class will more likely to come out victorious.”

“Ah, the class Harry is in charge of hm? Well, after all, his class is excessively well-matched…”

“Mhm. His class has many top-scoring students, so their foundations are set in stone. Even in Glen-kun’s class has Sistina-kun, it would be farfetched to put her up to the task of participating in every single competition.”

“Participate in every competition …hm?”

Then, for some reason, Serika sighed disconcertedly.

“Is this right Serika-kun? At this rate, your beloved disciple will really starve to death won’t he? Why don’t you give him a hand?”

“Well, there’s no need to worry about that, headmaster.”

“Even if he has to eat grass or chew at sticks, he will surely find some way to keep on living. I’ve taught him about such things in the past you see? On top of that, it seems that it would be more interesting to leave him as he is right now.”

The headmaster, seemingly enticed by Serika’s refusal, curved his lips into a smile.

“His motivation might be ‘that’, but at the very least, Glen seems like he ‘feels like it’ right now. Recently, the ‘sports festival atmosphere’ has been spreading like a disease, and I was starting to get fed up with it, but… Now then, what will he do?”