Sigh, let’s see. Where do we start?

From zero I guess…

HAHAHA so funny~~~… sorry. Anyway, onto the actual spoilers.

<TL Note: For most of the quotes, descriptions between dialogue are cut out>

After the anime scene:

Emilia and Subaru continue to have to their conversation, then we get to this:

“Uhm, I told Emilia that I love you, and Rem told me that she loves me, so-!”

The scene is more shocking in book form since it has an entire page to its own, and the text on the page before that is perfectly spaced to lead into the next page.

The line immediately leads to the next chapter “Fragment: Natsuki Rem”. The translation for the web novel version can be found under “IF: Natuski Rem”. The really messed up part is that in this timeline, Rem grows into Emilia’s hairstyle.

Interlude 1: “Time to dig in” (Itadakimasu)

Here comes the roller coaster. After subjugating the White Whale, Crusch and Rem split apart from Subaru and Julius’ group. The two of them have a nice little conversation about Subaru, and one of the punchlines is:

However, immediately after this, the group is attacked by an unknown force. The group is rapidly killed/knocked out, the carriages get destroyed, and finally, Crusch attacks the man with her sword with her “Blessing of the Wind” (invisible strike).

The sword strike had cut through the thick skin of the white whale, and fell its enormous body at a large sacrificecompared to those of manabeasts, there was no way that the man’s body could resist this strike.

“…You slash a person as they’re in the midst of a pleasant conversation, just what kind of education have you recieved?”

The man tilted his head, and the brushed off the sword strike that connected with his body.

Later on, Crusch’s right arm is blown-off as she tries to fight back.

The two assailants introduce themselves:

Then Rem, in her last moments of consciousness:

“When he finds out that I have been lost, I wish that his heart will waver.”

The actual metaphor here, is “I wish that his heart will ripple” (like water).

Subaru and Ferris return, and reunite with Rem and Crusch, and discover that Crusch has lost her memories, and that everyone has lost their memories of Rem.

While Crusch is still conscious, Rem is in a coma.

Subaru and Wilhelm have a conversation. Wilhelm thanks Subaru once again, and it is revealed that a wound had been inflicted on Wilhelm’s left arm when it reopens. However, Wilhelm tells Subaru that it is an old wound, inflicted by his wife who had the ‘Blessing of the Death God’, which deepens one’s wounds when they are around the person who inflicted it, and reopens old wounds.

Then, between parts 3 and 4, Subaru commits suicide by stabbing himself in the throat with a dagger, however, he ‘returns by death’ only to find himself at Rem’s bedside, confirming that his save-point had been updated. As Subaru contemplates, Emilia enters the room looking for Subaru. They talk about Rem, and Emilia believes what Subaru says. When Subaru states that Rem is Ram’s little sister, a brief comic relief of ‘Besides the chest size, everything else is fairly the same from Ram.’ ensues (though isn’t dialogue).

“Emilia, could you listen to one request?”

“Could you go behind? I’m crying a bit.”

For the one who declared it, this was a declaration of war against destiny.

“I willI absolutely will!!”

That wraps it up for Volume 9 of Re:Zero; Now also entering volume 10, alongside KonoSuba… Here’s volume 10’s cover anyway, now, I wonder who that could be… 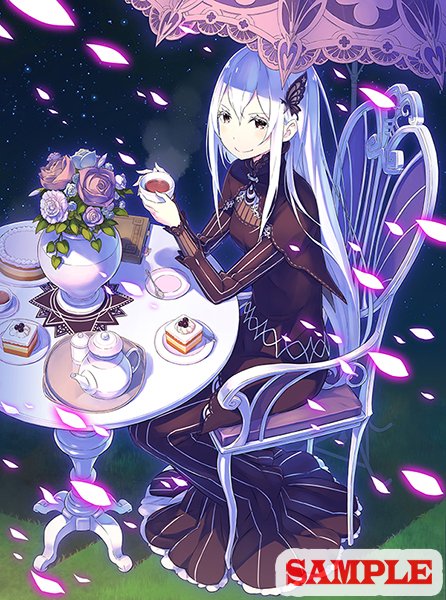 Here’s a cute(?) version by the illustrator as well:

I Shaved: Yuuki come back Q_Q

This is a work of fanfiction. Names, characters, places and incidents are products of the original author’s imagination or are used fictitiously. Any resemblance to the original work, other works, events, locales, or persons - living or dead - is entirely coincidental.
%d bloggers like this: